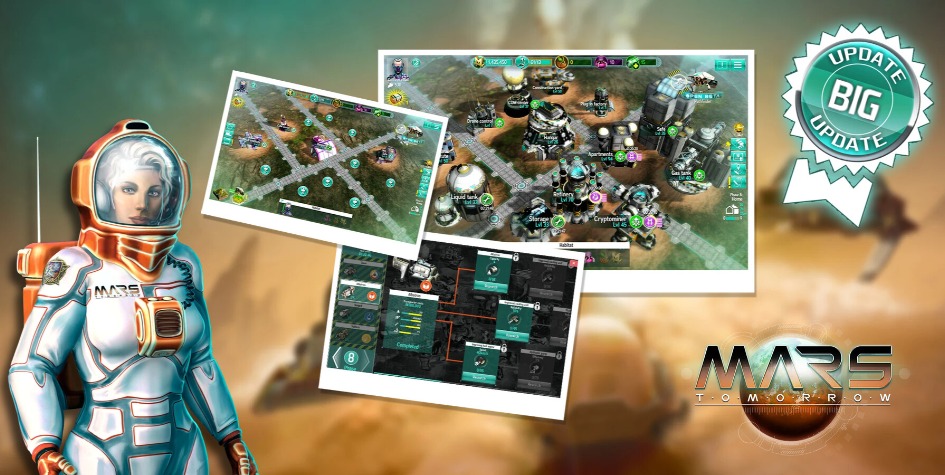 In Mars Tomorrow, you will become a terraforming specialist and shall be transforming the red desert into a second Earth.

The future of mankind lies in the red sand. As a colonist, you shall land on Mars and dare to make a new start, because human civilization on Earth is about to decline.

But although the Mars of tomorrow is anything but a paradise: As a space pioneer, you are one of the first to set foot on the barren world. The first task is to extract important resources - things like oxygen, water, carbon dioxide - and develop them into vital products. More and more people will settle in colonies like yours, creating larger production chains and economic cycles. Coordinating everything, planning ahead, and contributing to the well-being of the population shall be part of your tasks. Thus, Mars Tomorrow primarily presents you with the challenge of an economic simulation. You will see that soon the greenhouse gases emitted will cause an Earth-like atmosphere to spring forth on Mars. Clouds, rain, rivers, lakes and, above all, algae will change the image of Mars into a fertile world.

Challenges of the future

However, as terraforming progresses, you shall also face new problems. For example, your Mars vehicles were created for the rocky desert world and are not designed to drive on muddy surfaces. If you want to maintain resource production, you will need to carry out some adjustments. The atmosphere is not dense enough to use airlifters in the beginning, but with timely research efforts you will be able to outrun other players later on. Remember: You and your colony are only one of many on Mars. Directional decisions and a sense of timing are important if you want to effectively set yourself up for the endgame of this sci-fi game.